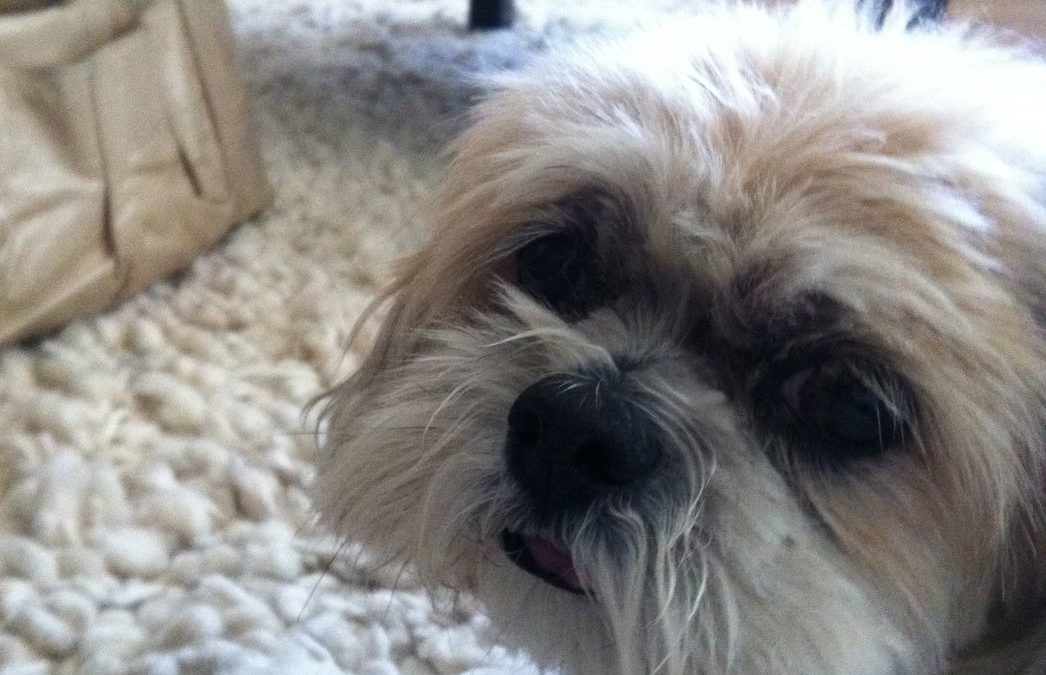 About a year or so ago when I first started to read the Bhagavad Gita, the epic about the internal war we all fight, I came across some lines in Ram Dass’ excellent Gita explainer book, Paths to God, that stuck with me. Talking about Arjuna, who doesn’t want to fight his family on the battlefield, he writes: “He has his own ideas about what he wants his path to be. But gradually, we come to realize that following our own path isn’t going to get us where we want to go; we begin to acknowledge that our dharma is our route through, and so we start to surrender to it.”
I kept wondering at the time, and every time I’ve read that line since, what my dharma is and how I could surrender to it so I could find my way through all the ways I feel stuck, stunted.
In August, I lost my sweet little dog Karma to cancer. She was my constant companion, the first dog that was just mine, who I was solely responsible for, and who was allegiant to only me.
When the time came to say goodbye, it was the easiest decision to make and the hardest to follow through on. I didn’t want to say goodbye, but I didn’t want to see her suffer and it was clear she was suffering that last morning. Maybe even the evening before, when she sat up by my bed on guard, unable to get comfortable enough to sleep. I had to carry her down for her last walk, dropping her on the grass to do her business. I picked her up and started to carry her on her favorite walk as she relaxed in my arms. But it was too hot for even that and I could tell it didn’t matter to her at that point — she was in a daze, uncomfortable, no longer interested in sniffing bushes to see what other dogs had been around. I took her back up and waited with her for the vet.
The last weeks of her life, I worked to remember things about her. How it felt to pet her, the abrupt lumbar curve in her low back, unnatural to dogs, but part of her. How she loved her back hind leg to be scratched. How it felt when she rested her head on my chest. Her weight. She grew me, made me more kind, more patient.
A couple nights before she died, I played with her, tossing her favorite toy as she chased it, burying it in her sheet and barking at it. As sad as I was to say goodbye, I feel this sense of love whenever I think of her. There were no other options in the end and I knew she was a happy dog.
So a couple weeks after losing her, I felt like I was ready for another dog, not to replace her, I thought, but to cheer me up. A dog who I’d grow to love.
Phoebe was bigger than Karma. Her body was built like she was a doggie linebacker, making it somehow difficult to lift her 14-pound body.
The first week she was so happy wagging her tail, running on our walks, cuddling. She would sit all proper, paws tucked in while I prepared her meals. We had some housetraining issues but I worked with her. We started to bond, she would sit under my chair while I worked, accompany me to the coffee shop.
And then a week and a half in, she started to show signs of serious anxiety. Panting when I was gone, freezing when we weren’t inside. It seemed to get better then worse. She was falling over, shaking her head, she looked dazed. Something was very wrong.
The rescue group took her to their vet who admitted her and eventually diagnosed liver problems. She’s back with her foster, a scan to be sure it’s her liver and surgery to correct and return her to health is already scheduled. If all goes well, she should lead a long, healthy life.
If it were that simple, I’d take her back in a heartbeat. If I hadn’t just watched Karma die. If I hadn’t spent the last four years helping Karma with her ongoing allergy problems, cleaning her ears daily, feeding her medicine or herbs or whatever new treatment was going to cure her once and for all. But I did.
I see what I did, too. I went to find a new Karma. I found a sick dog, like Karma.
And I realize that part of the reason I rushed to get a dog wasn’t only so that I didn’t have to keep feeling sad, but also because I didn’t want things to change, I didn’t want to feel that emptiness in the house, to be alone. As much as I didn’t want to think about moving forward after Karma, I didn’t want to go back to being who I was before I adopted Karma. I wasn’t very happy or connected to my life. I slept late, stayed up late writing or going drinking with friends, trying to be in my 20s. I would start my Saturdays with nothing to do, having dreaded the weekend during the week when I had work to keep me busy.
So maybe rather than running away from these fears, this is my work. To sit with myself. To dig deeper than I’ve ever allowed myself to dig before. When I do sit and look at myself, without pity or anger or embellishing, I get a tickling in my throat. Sometimes I run from it. Lately I try to come back to it right away. I feel it now. There’s a spot, I think. There’s something there to learn about, maybe a way to grow. Or maybe, as Ram Dass put it, it’s the place where I surrender, my way through.