Calling in Some Warrior Strength 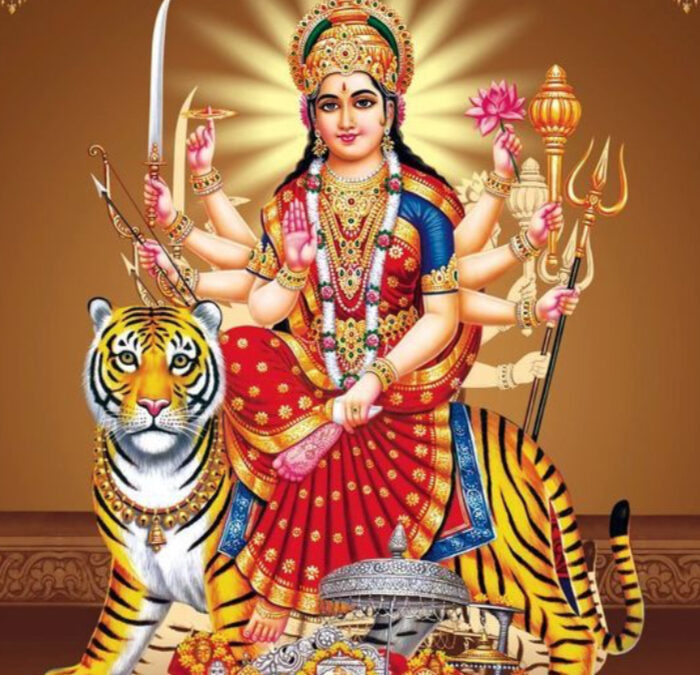 Tell me if this sounds familiar: times are dark. Ego-driven, corrupt, dark forces have conquered and taken over…

Actually not the story of 2020 but the rising of the divine feminine, the Goddess Durga.

I love reading about the story of Durga because it feels like a thread of hope for these times. It also mirrors the times.

Durga shows up In the world when there is great injustice. Her fierceness arises out of her deep compassion. Tantra Yoga Teacher Sally Kempton says her battle cry is “yes, you can!”

In one of her origin stories: the dark forces described above are two demonic brothers who have taken over, defeating the gods in battle.

To save the world, the gods, guided only by their intuition search the underworld for the mother goddess, Durga. Finding her, they sing her praises and ask for help.

As Kempton tells it:

Durga consented and took form as a gloriously beautiful woman, and flitted into the garden of the demon kings. Connoisseurs of beauty, the demons were delighted, and sent an emissary to invite her to join their stable of wives. “I’d love to,” the goddess said. “But there’s just one little thing. When I was a child, I took a vow to marry only a man who can defeat me in battle. Silly of me, but you know how girls are.”
Thinking it an easy battle, the demons agree. Long story short, Durga rides her lion (in some stories it’s a tiger) into battle and wins. The world is restored.

Durga is inspiring like any superhero story is. On a deeper level we can connect with it to  find harmony within ourselves. The dark forces can represent those parts of us that over-analyze or where we get caught in our ego. Durga can represent reconnecting to our heart, or our truth. In the world, it can represent speaking up against injustice.

Another way to connect to those inner qualities and the energy of Durga is to chant one of her mantras. Below is a simple Durga chant from Janet Stone with a dance beat if you want to give it a go.

I began a mantra class this week on Durga where we chant her invocation and other mantras to connect to our inner strength to move through difficult times. That might be that courage to speak truth to power or the fortitude to overcome whatever obstacle we are facing.

Chanting each morning this week energized me. Instead of feeling flattened by the news, I felt connected to my voice. I danced. I felt a reprieve of hope and lightness.

I know, it’s kind of woo-woo. You can totally ignore Durga and the idea of the gods and goddesses and still practice yoga. There are different lenses, or philosophies, that the modern yoga practice derives from.

I come to Durga very much as a more recent student. Much of what I’ve studied comes from a workshop and book by Tantra yoga teacher Sally Kempton who has written in much more detail how to work with Durga to move through challenges.

One of my other teachers is offering a course this week drawing the Durga yantra. a yantra is a diagram that is meant to help focus the mind similar to a mantra. I just signed up!

This week in practice, we will practice gentle backbends and see if we can find some of that Yes, you can! motivation to rise through our challenges.